The Mothers and Fathers of French Sauces

In August 2016, the New York Times published an article that outlined our generation’s “New Mother Sauces”: yogurt sauce, pepper sauce, herb sauce, tahini sauce and pesto. While it remains to be seen if these so-called new mothers will go down in culinary history, the original sauces of French cuisine nevertheless remain popular classics in restaurants and private kitchens alike.

Take mayonnaise, for instance. Americans spent 1.86 billion dollars on the stuff in 2015, mostly as a sandwich spread, while Russians consumed 11 pounds per person that same year as a condiment for all types of food! Millenials world-wide are dunking their fries in it, and the Japanese have been spreading it on their pizzas for ages. How have sauces like mayonnaise become so ubiquitous today?

I would like to think that it has something to do with the cornerstone of all things sauce-related: the much venerated “mother sauces” of French cuisine – the espagnole (brown sauce), velouté, béchamel (white sauce), tomate, and hollandaise. These are the mothers of all sauces: they can be adapted in infinite ways to create delicious offspring, like mayonnaise!

There are two key father figures in the history of French sauces: Marie-Antoine Carême and Georges Auguste Escoffier. 19th century chef Marie-Antoine Carême revolutionized culinary history by publishing a textbook/comprehensive guide to French cooking for future chefs called The Art of French Cooking in the Nineteenth Century. In it, he highlighted what he called the grandes (big) sauces – the espagnole, velouté, allemande and béchamel – and the petites (small) sauces – all of the possible variations that can be subsequently created (like demi glace or béarnaise for example).

His contribution to French sauce history is only second to his impact on culinary history. Notably, through his particularly artful and careful presentation of dishes, he played a large role in transforming the culinary craft into an art form. His dessert innovations set nineteenth-century Paris ablaze: he created pièces montées that looked like miniature exotic gardens or antique palaces. Well-read in matters of art and architecture, these realistic looking landscapes were extremely ornate and completely edible!

Most remarkably, Carême was instrumental in ushering forth the idea that specific sauces and French cuisine were actually the mother sauces of a universal cuisine. For example, although the espagnole and the allemande were imported to France, it was thought at the time that they were sufficiently altered to be considered truly “French”. Since Carême, the idea of basic quintessentially French sauces, soups, or broths has lived on, and spread from France to the world.

A century after Carême, world renowned French chef Escoffier made his mark in both France and abroad, working at the Hotel Ritz (Paris), the Carlton Hotel (London), and the Savoy Hotel (London). Not only is he praised for simplifying recipes and developing the kitchen brigade system (which organized kitchen work), but he also created legendary dishes like the pêche melba, a peach pastry named after the highly celebrated Australian singer Nellie Melba. Moreover, legend has it that the Kaiser Wilhem II, while traveling on the ship SS Imperator, was so impressed by the French chef’s skills, that he said “I am the Emperor of Germany, but you are the Emperor of Chefs”.

Escoffier contributed to French sauce history by publishing a book in which he adds tomato sauce to Carême’s list and relegated the allemande to a subset of velouté. More importantly, he used the title “mother sauces” to identify the group. It barely matters that Esoffier may or may not have been the first to coin the term; indeed, his artful self-promotion through his book A Guide to Modern Cookery has ensured his lasting posterity in history books and cooking manuals alike.

Today, while most chefs and professionals sing the praises of these five sauces, others have nevertheless ventured towards innovation. To do this, they have snubbed one of the key ingredients of the typical French sauces – roux, a mixture of flour and fat (typically butter). In a world where most people diet, sauces have turned to so-called lighter dressings and seasonal ingredients. 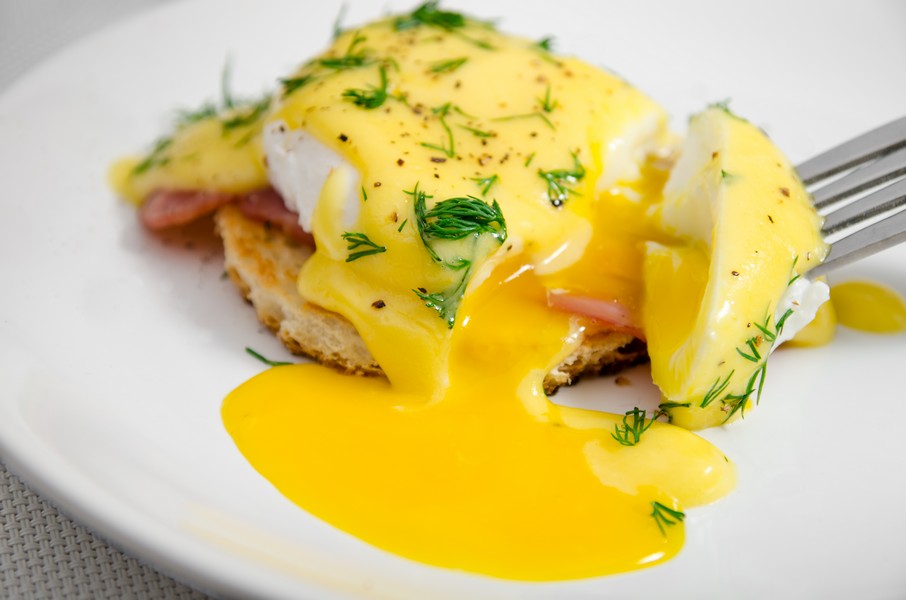 Indeed, while Eggs Benedict remain a personal favorite – it has a winning combination of poached eggs, English muffin, bacon and creamy hollandaise sauce (egg yolks, lemon, stick of butter, pinch of salt and cayenne pepper whisked together) – you can’t seriously call it a “light” or healthy dish! Same goes for macaroni and cheese, which a savory nutmeg flavored béchamel sauce can instantly make decadently delicious and particularly filling. These sauces also have a common ingredient, not particularly suited for those of us with lower metabolisms: melted butter!

I doubt the original “mothers” will ever be fully dethroned. Their versatility is key to their perennial success: after mastering the basic cooking techniques required to make them, you can create infinite variations and even adapt them to different cultures and contexts. When opting for either of these 5 mother sauces, you can follow the recipe or add a secret ingredient. In any case, your meal will be tastier for it!